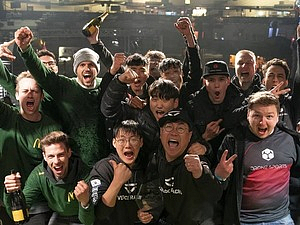 At the end of March, the Drone Champions League (DCL), the world's largest series of drone racing, started in the Swiss Alps. Representatives of the Moscow Aviation Institute for the first time attended the DCL.

The Head of the MAI Drone School, Kirill Schukin, is the manager and co-owner of the “Drone Sports Global” team, which was the first in Russia to enter this prestigious league. Among team members is a Moscow schoolboy Platon Maximov, who is studying at the MAI Drone School and is preparing to enter Moscow Aviation Institute.

“In total, eight strongest teams from all over the world came out to the championship, which throughout the season will compete for the champion title. In the final of the Swiss stage, the team Drone Sports Global met with the strongest Korean team “Team Veloce,” - said Kirill Schukin. - “As a result of the hot and uncompromising struggle, our team won the final race against the Koreans.”

According to the results of all races of the previous stage, the Drone Sports Global team shares the fourth place with the team from the USA. There are five stages of the series ahead, which will be held in different parts of the world.

"The fact that the Russians have joined the Drone Champions League is a significant event for all Russian riders, and I am sure that this will contribute to the popularization of this sport," - admitted Kirill Schukin. - “Especially since the next stage of the race, the DCL will be broadcast in Russia, on the Match TV channel.”