Space Talks: a Bold Look to the Future of MAI Student 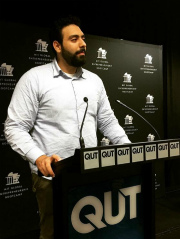 Mina Takla, a third year student of MAI Spacecraft Engineering program, and his CosmoX team will attend the 69th International Astronautical Congress (IAC), one of the biggest space conferences in the world (coined “the Olympics of space events”) held in Bremen, October 2018 and the First UN Conference on Space Law, Moscow, September 2018. The young scientists, entrepreneurs, and engineers will present their progress and milestones for their audacious and disruptive startup to the professional space community and its actors. Additionally, Mina and a few other researchers will present an research paper/presentation about building the first interplanetary hotel on the Moon in the early 2030s, on which they are working on now.

Mina Takla is not only a student of MAI, but also a Co-founder and CEO at his startup company, CosmoX. He is also the National Point of Contact (NPoC) for Egypt at the Space Generation Advisory Council (SGAC), a global non-governmental, non-profit (US 501(c)3) organisation and network, supporting the United Nations Programme on Space Applications. Mina Takla told us about his personal experiences and views, scientific activities, startup and amazing space projects. Mina Takla was born in Egypt and studied at an American High School in Sharm El-Sheikh, then he decided to focus on space research after graduation. ”In my home country we did not have a space program. My interest in space started on the very first day I learned about planets in the solar system. It was in the 4th grade. Pluto was still a planet then. Shortly after this, I surfed the Internet in search for NASA and was mind-boggled and bewildered by the fact that there are trillions of stars and galaxies in the observable universe and the notion that there might be countless worlds out there like our own. When I was in high school, I really wanted to study space in college. Back then, I wanted to study astrophysics, but everybody said that I was out of my mind! They said that I will not end up with a real-world job in Egypt if I continued pursuing a career in this field. It was impossible to study space there because this major didn’t exist in many universities,” - recalled Takla.

Takla went along the usual path. The closest sphere related to space was engineering. He studied a Bachelor’s degree program in Mechatronics Engineering at the Arab Academy for Science and Technology and Maritime Transport. “Over time, I realized that this education did not suit me. It was not challenging me to be more creative and innovative. I wanted to study all about space and nanosatellites,” - said Takla. After finishing nearly 4 years in his BSc program in his home country, he found out about Moscow Aviation Institute through his professional space networks and transferred to the second year of MAI Bachelor’s degree program in Spacecraft Engineering in 2017. 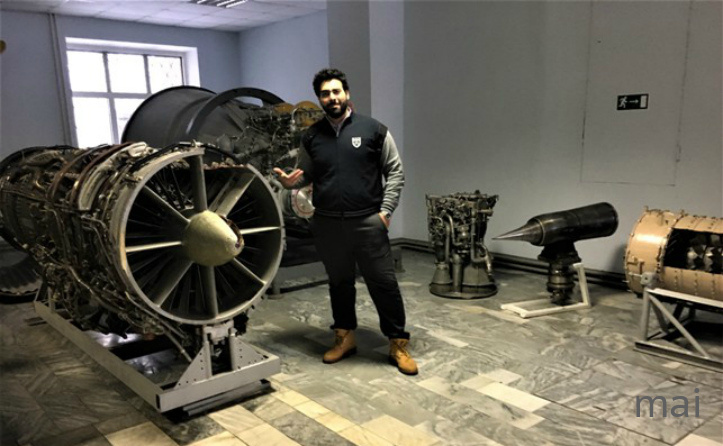 The scientific and outreach space activities of Mina Takla began in 2014, when he started participating in projects organized by the Space Generation Advisory Council (SGAC), where students and young scientists share their views with current leaders from space agencies, industry and academia through different projects groups and events. University students and young professionals with interests in space-related fields and activities aged 18-35 from anywhere in the world can become members of this organizations.

An example of our scientific work done at the SGAC Space Exploration Project Group is our previous research, conducting analog planetary missions. 6 analog astronauts lived inside a remote habitat for 14 days and conducted scientific research in different space-related fields with no communication with the outside world except with the CapCom in Mission Control. It was the first such mission to be conducted in Europe. Moreover, at SGAC members discuss problems of space exploration, global navigation space satellites, small satellites, space law, commercial space industry, space technologies for disaster management and more. 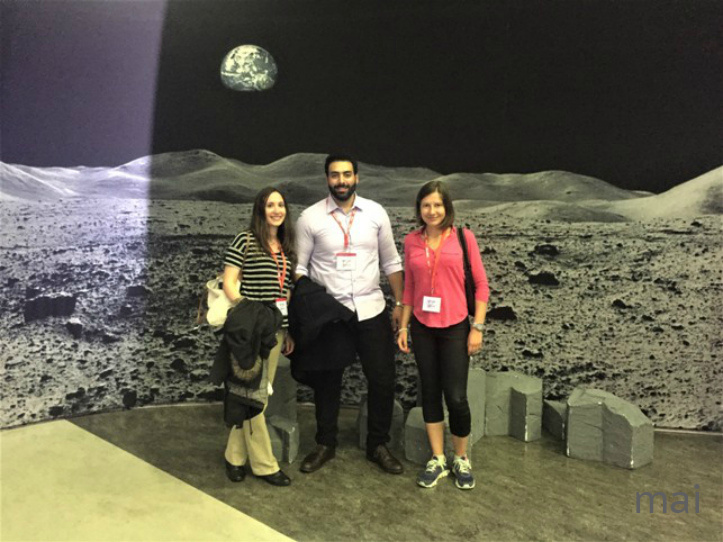 “I read about the adverse effects of climate change in articles and scientific publications, but I knew for sure that in a few years, a lot of disasters, such as flooding, wildfires, dust storms, landslides, and hurricanes would increase in frequency and intensity around the globe. Unfortunately, that’s what’s happening right now. These disasters are fueled by climate change. Through NASA ARSET, I actually learned that we could, through patterns recognition and remote sensing measurements, predict some disasters before they even occur. We can also respond to disasters using satellite technologies. With the help of the Disasters Charter’s satellite constellations, disaster managers can generate heat maps of disaster-affected areas and evacuate vulnerable people from hazardous places. Satellites can also help us recover from disasters and closely monitor and measure the impact of a certain disaster. From that very moment, I knew I wanted to use satellite technologies for disaster management and climate change to help solve these global challenges. It is not a new technology though, but it’s got some shortcomings and challenges. The problem, however, is that satellite data take time to reach the ground and time to process/analyze to derive insights out of this data. The main technical challenges include improving the temporal resolution (revisit time/frequency of observation) and the efficiency of satellite data acquisition and data processing/analysis.

The other problem is that conventional satellites are huge, the size of a washing machine or a school bus, and cost $100,000,000s. Currently, the commercial space industry is booming (The Global Space Economy is worth $300B+ and is projected to top $3 trillion in the next 30 years) and more private companies, startups, and university students are increasingly using CubeSats both for research and commercial applications. Though their power and capabilities are limited relative to conventional satellites, CubeSats are much smaller in size and volume (10x10x10 cm for 1U) and cheaper by orders of magnitude (While launching a fully functional 1U cubesat would typically cost $100,000, building it could cost as low as $8000 or lower depending on the materials, systems/subsystems, and components). CubeSats can be built and launched in large numbers to collectively achieve a certain mission or goal and decrease the overall risk of mission failure. If you put a network of CubeSats in orbit, you could improve the temporal resolution. Similarly, if you could improve the communication and computing systems, you could cut the acquisition time and improve the productivity and situational awareness of the end user. It’s a question of time! I think any problem must be addressed from an interdisciplinary perspective to gain a deeper understanding of all the dimensions of the problem. That’s exactly what we do at CosmoX,” - explained his idea Mina Takla. 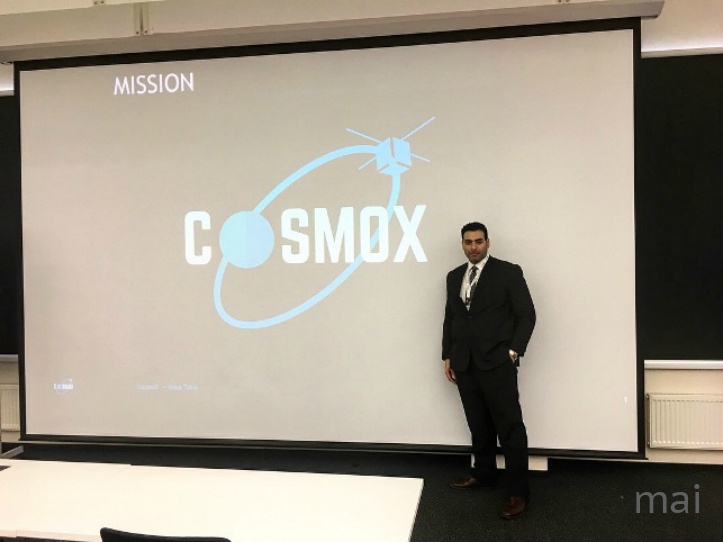 In March 2017, Takla attended the MIT Global MIT Entrepreneurship Bootcamp, a highly selective MIT Program that condenses a one-year MIT course into an intensive one-week learning experience, with the idea of using nanosatellites/CubeSats for disaster management. It was held for a week in Australia and challenged entrepreneurs to use MIT DE, using 24 steps to build a startup in under a week. The program was very selective; 6000 applicants from all over the world applied for this program, but only 124 got admitted. There he met his co-founders and shortly after, formed a core team of 7 entrepreneurs and engineers that founded CosmoX.

Their startup company CosmoX has been trying to validate the market’s need for frequently updated data and insights for climate research and disaster management applications. In the future, CosmoX plans to build strong partnerships with space industry stakeholders,  create a cloud based platform to process/analyze satellite data , build a satellite prototype soon, and find investments, of course. The participation in the International Astronautical Congress with CosmoX and the Moon project will give Takla and his team a unique opportunity to network with high-profile space industry stakeholders, including representatives of industry and international space agencies.

“My plan after my participation in the International Astronautical Congress is to finish my degree program at MAI, work on my space startup/projects, and do research at the university’s facilities (i.e. 3D-printing and Cubesat laboratories). I really want to work on my research ideas here at MAI, but I would like to simultaneously build and run my startup company not to be left behind and lose our competitive advantage in the market. It’s all about time! We are open to discussions with all investors in Russia and around the world. Now I got a clear vision of how the future would look like and I know exactly what I’ll be doing in the next 30 years!”

Mina Takla promised to tell us more about CosmoX and his Lunar research project after the International Astronautical Congress.