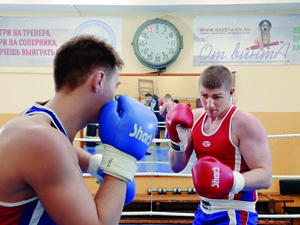 This year one of the most dynamically developing sports at MAI became a student box. For the first time in several years our team reached the final of the championship among Moscow universities. Aviators took the second place. Due to surging popularity was established a new competition called the Rector's Cup.

Five days a week, from nine in the morning to nine in the evening, in the boxing hall next to the third pass, students train continuously. Students methodically work out blows on the punch bag, master movements in sparring and are engaged in physical training.

Classes in the section are usually counted as physical education lessons. “The main thing is to bring a certificate from the doctor and have time to enroll,” -  said coach Anatoly Shpilev. Retired major of the airborne forces, seven-time champion of the Airborne Forces in boxing, world-class master of sports, world boxing champion among servicemen Anatoly Shpilev began to lead the box section of MAI 17 years ago. 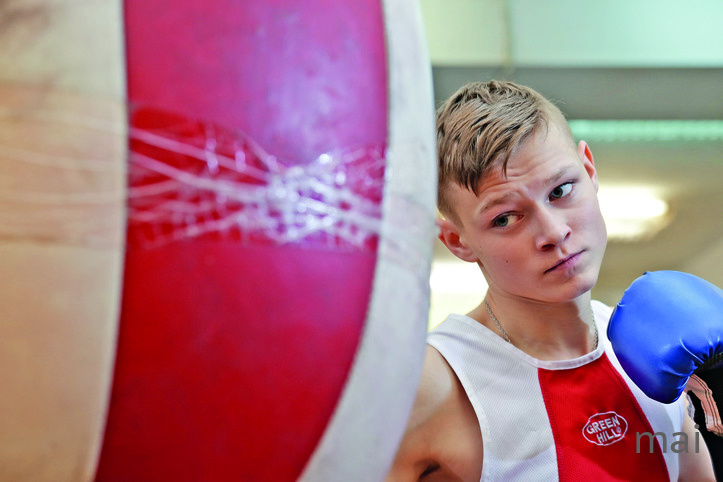 Classes are held absolutely free of charge. Unlike rugby or, for example, handball, which for decades have been a talent foundry for the USSR and Russian national teams, boxing from the first years of the section's existence in MAI was intended primarily for amateurs.

One of the important lessons that Shpilev’s students receive is a lot of discipline. All athletes have to attend eight-nine classes per month. In the case of missing classes the coach either gives a note to transfer the failed student to the general physical preparedness section or asks to catch up missed classes. “In real life students will have to start projects and be responsible for themselves and other people,” – said Shpilev. – “When you do sport, first of all you learn to be responsible for yourself and the result”.

If a student doesn’t attend enough classes, the coach offers him to come on overtime as the gym opens practically all the time. Once a student said that his mother thought it was impossible to catch up all the 19 lessons and wouldn’t cope with it. Then the coach brought him to the mirror. The student was significantly younger than his mentor and his complexion was clearly superior. As a result mother’s recommendations were reviewed and the boxer returned to the section. 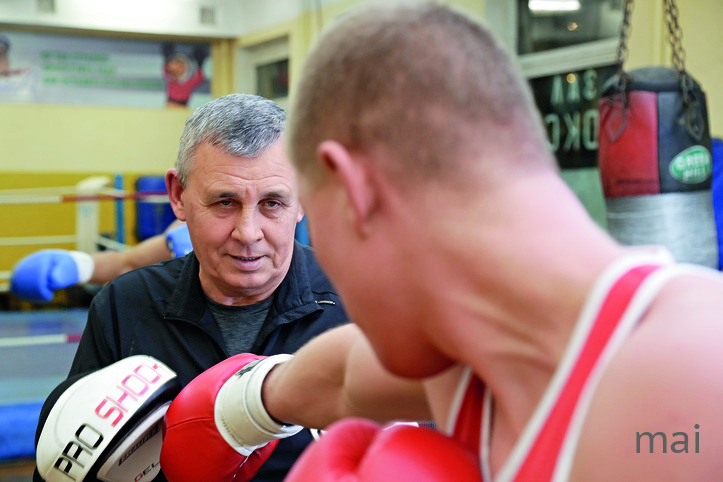 Boxing makes you keep your head in suspense. Reaction, tactical ruse during the fight in the ring is much more important than the muscles, “hardened tins”. In total attending the box section of MAI for a year or two gives good results.

So effective training contributes more than twenty years of experience in coaching of Anatoly Shpilev. For example, recently he developed a new technique for teaching basic kicks. Outwardly it does not seem more complicated than the rotation of the body. Those basics, that the coach comprehended in his youth for a year and a half, now the students master in one to two months.

The coach incorporates know-how creating the equipment. For example, MAI sews the punch mitts for the mat by itself. Hand-made punch mitts are better than the Chinese one. They are less traumatic for the hands.

Anatoly Shpilev has dozens of stories about students, for a year or two from zero level who managed to reach the final of Moscow championship. The greatest reward is the coach's thanks to the graduates of the section. It happens that the already disaccustomed students come to visit, remember the lessons, telling how the boxing helped them in some situations. “Initially, box was invented to protect loved ones”, - said the coach. “And there are occasions when the skills developed in the hall are used in everyday life. Once a graduate came to the hall (with a broken arm) and thanked: the skills in the section helped protect the girl from punks”. 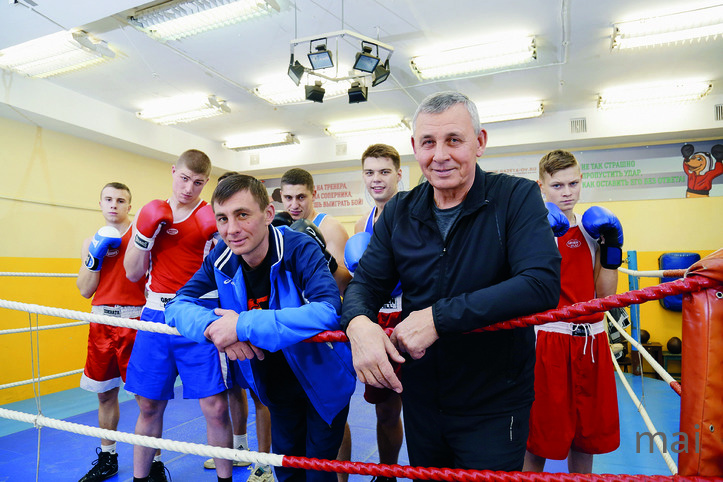 In the last two years, several important events have occurred in the life of the section. The most important thing is that the aviators successfully performed at the championship of the capital's universities. 35 teams took part in the competition, and MAI students took the second place. And this year the MAI administration began to open after the reconstruction the gyms. . In most of them, along with the new equipment-cardio equipment, a zone of free weights, dumbbells, there are grounds for single combats.

Sites for martial arts with special covers (and coverings, and equipment purchased by the university administration) are open in dormitories on Dubosekovskaya, Tsareva and Latsis streets. But officially the section of MAI has no relation to the new sports sections. In groups of 10-15 people, classes are conducted by enthusiastic athletes from among the students themselves.

In summer several rings for martial arts were opened on Dubosekovskaya Street. In the dormitory "Friendship" after the reconstruction, a gym was opened for wrestling and boxing. Head of the section, a student of the second faculty Alexey Tsyplakov, inherited an old room of 50 square meters. More recently, the administration has equipped the premises with new equipment - a special soft coating, punch bags, dumbbells and free weights for training. Three times a week Alexey conducts training for students, a group of 15 people from different courses. On other days in the same hall of the training session, his companion Tikhon Vavilov conducts the struggle. 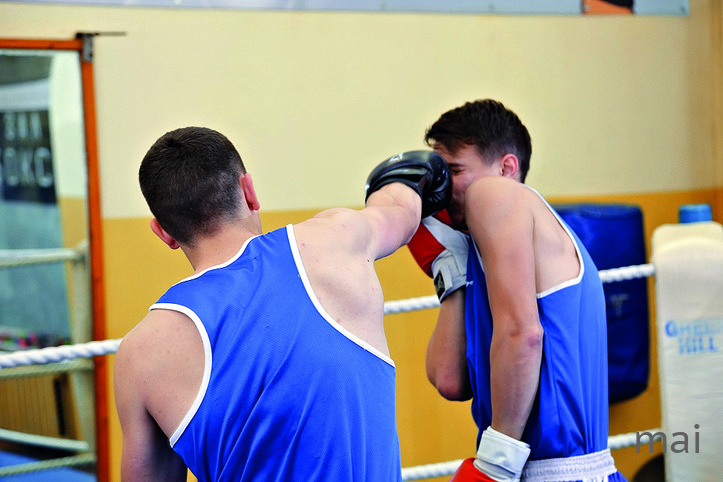 Before entering MAI Tsyplakov received a black belt for the Kudo fight. Then he got carried away by boxing, reached the 1st rank. To train all comers he likes. “Before the renovation, the hall was equipped extremely poorly. In other words the students bought coverage and equipment for their money. Many students after graduating left and took part of the equipment with them. It's great that the administration of the university helped us with equipping the hall, it became much more convenient to practice”, -  said Alexey.

MAI rector Mikhail Pogosyan, who himself attended the section under the leadership of coach Lyubimov, pays much attention to the sport. “I was lucky with the coach”, -  recalled Rector. “Alexander Lyubimov taught to do your best in the ring and in life. I didn’t want to be a part of the big sport, but the ability to concentrate, understanding tactics were very useful for me later in life”.

In 2017-2018 academic year for the first time in the history of MAI, competitions for the Rector's Cup took place. They helped to select the most sportive students, including for some reason not involved in the section, to protect the honor of MAI in Moscow competitions.

In 1948, the boxing section of MAI was created by the four-time Moscow champion Alexander Lyubimov. The MAI boxing coach had trained students for 40 years. Lyubimov not only brought up more than 100 first-timers, seven masters of sports, but also became an excellent popularizer of single combat. His articles were printed by leading sports publications, including Soviet Sport.