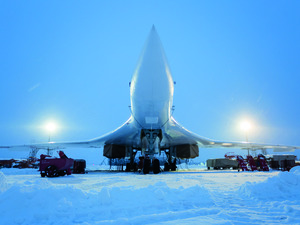 Specialists of the Kazan Aircraft Production Association named after Gorbunov renewed the process of electron beam welding of titanium parts. The unique plant for this process has been design already in 80s. However, in the turbulent 90s it became unnecessary. Having been useless nearly 30 years this equipment was moderated, and now it is operating again. Sergey Tepaev, MAI graduate and also the technology director at the Tupolev Company, helped to give a second birth to this technology.

It is known as a “cosmic metal”. However, nowadays it is used not only in the “building” spheres as in cosmonautics, aircraft engineering, shipbuilding and motor vehicle industries, and also in such areas as chemical, defense and medical industries.

This chemical element has been discovered three times by an Englishman, German and French. Firstly, William Gregor of Creed in Cornwall 1791 identified a new oxide of an unknown metal, which he called the menacen earth. Four years later Martin Heinrich Klaproth fr om the Berlin Artillery Academy discovered a new element in the mineral of rutile. Klaproth had already given names to these new chemical elements in honor of the characters of ancient Greek mythology. In 1789 he named the black metal-like substance he received as uranium (yes, yes, that was the uranium that we are using now in the nuclear industry and warheads). A decade later, Professor Louis Nicolas Vauquelin from the Paris College de France discovered the same element in the anatase and realized that it was the oxide as in the rutile. 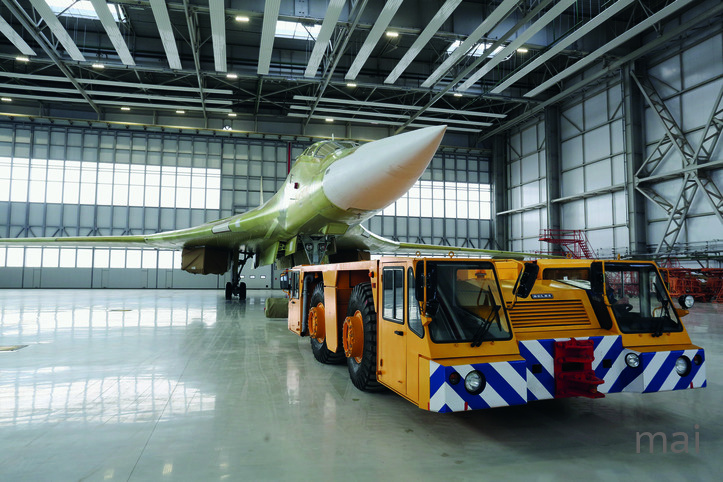 As a result, the element retained the German name - titanium. However due to the highest chemical activity and complexity of purification, pure titanium was obtained only in 1925 by thermal decomposition of titanium iodide vapor. And only in 1940 Luxembourg metallurgist William Kroll received the first several dozens of kilograms of pure metallic titanium with a magnesiothermal method. This method is still used in industry.

With a variety of advantages, titanium immediately attracted the attention of designers and material engineers. It is half the iron, plastic, ductile, well processed, fairly solid and durable. Furthermore it never loses its values under the high temperatures (up to 400 °C). Also titanium doesn’t deteriorate over time, either in the air, in the river or in the sea water, in all kinds of corrosive environments.

Revival of the “White Swan”

We would like to introduce you to Sergey Tepaev. In 2010 he graduated from the first faculty of Moscow Aviation Institute, specializing in aircraft and helicopter construction. Having been a student Sergey came to the Tupolev Company as a manufacturing engineer.

“At MAI, at least in the department wh ere I used to study, you were already considered as an engineer from the fourth year, tasks were assigned to the future specialist of the aviation industry,” – remembered Sergey. “Once one professor of mine told me that besides technical basis you got at the classes, you are taught to communicate with people, to listen to and hear them, too. From my point of view, the most important thing for the team work is the ability to hear specialists”.

MAI technique has justified itself by 100% as in 2012 Tepaev already headed the technological service of the Central Design Bureau, engaged in technological support of the aircraft at all stages of its life cycle.

We also want to introduce you to Tu-160. Russian pilots dubbed it a “White Swan”. It is the world’s largest strategic missile carrier. The first flight happened in December 1981. Furthermore, the aircraft is known for its use of the largest proportion of titanium, 26-28% of the total weight. 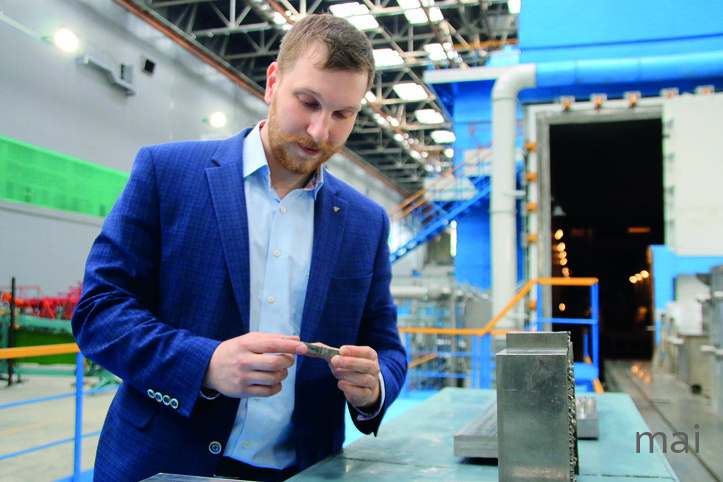 In 2016 the Ministry of Defense of the Russian Federation decided to start buying new Tu-160. It was required to restore the production of the "swan", which was collected at the Kazan Aircraft Production Association named after Gorbunov (now it is one of the branches of the Tupolev Company).

One of the most important components of Tu-160 design is a central beam made of a titanium alloy 6 watt-hour, weighing about 6 tons. The beam is the most loaded element of Tu-160 design. The main mechanisms are attached to it that ensure the sweep of the wings, detachable parts of the wing, chassis. The beam is assembled from several parts of a large thickness of titanium alloys. To minimize the mass of the beam, we decided to use welding to connect its parts. Approximately 180 m of welded joints were obtained. The type of welding was chosen on the basis of electron beam technology

“This technology is well-known,” – said Sergey Tepaev. – “Back in the 1950s, the German physicist Karl-Heinz Steigerwald demonstrated the use of an electron beam to produce holes and precision machining. In 1957 the Frenchman Jacques-Andre Store created the world's first electron-beam welding machine. But the following year, the same technology was first applied in the USSR with the joint participation of BMSTU and MPEI. In the 1980s, the technology of electron beam welding was widely used in the industry (also in aviation) in the manufacture of elements of titanium alloys for Tu-160.”

The electron-beam welding station at the plant in Kazan includes two unique installations: a 24x16 direct electron beam unit (EBU), designed for conducting welding processes in vacuum, and a vacuum annealing furnace UHV 45-180 / 8.5, which removes residual stress after the welding process. “The uniqueness of the electron-beam welding section at the Kazan aircraft plant is the overall dimensions of the welding and furnace installations. Their volume is 1350 m³ and 850 m³,” – said Tepaev. – “This is one of the largest units in the world.” 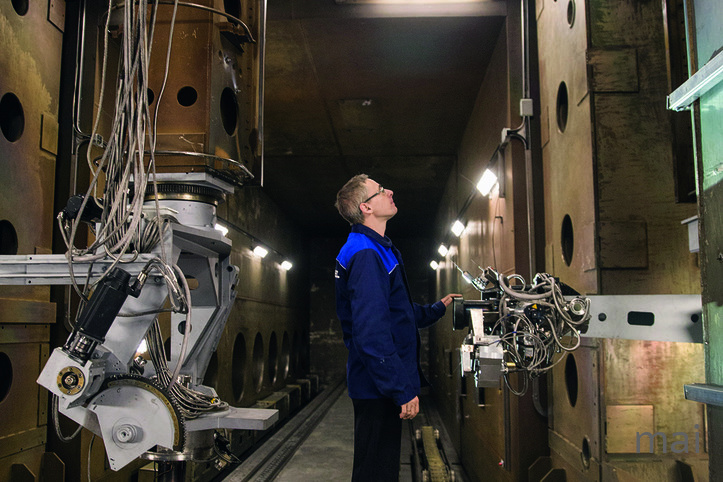 To revive the technology of electron-beam welding at the Kazan aircraft plant in 2016, working groups were formed from Tupolev technologists, as well as from the All-Russian Scientific Research Institute of Aviation Materials, the Elektomechanika Company and NITI Progress. They included Sergey Tepaev, who was appointed to the post of Technology Director at the Tupolev Company. The role of the Tupolev was primarily in the organization and coordination of work on the restoration of the site, the alignment of technical tasks for the modernization of equipment and development of manufacturing technology in general. “The area of ​​electron-beam welding is one of the key for the reconstruction of the production of Tu-160,” - Tepaev said. – “For me, participation in the restoration of the EBU was primarily an example of well-coordinated work of the teams of various enterprises: Tupolev, Elektomechanika, NITI Progress, All-Russian Scientific Research Institute of Aviation Materials. All the specialists worked like crazy, feeling proud of that they manage to make their contribution to such a large-scale and unique project”.

The process of manufacturing beams consists of several stages. Firstly, beam assemblies are prepared: each or several assemblies are placed in the chamber. Secondly, a deep vacuum is evacuated to 10-4 mmHg. Using the electron beam gun (electron beam unit has two of them) installed on the robot manipulator, welding is performed. Further, the quality of the seam is assessed (visually and by means of nondestructive testing). The welding speed can reach 36 m/h.

The finished aggregate is then transferred to a vacuum annealing furnace. It is the largest in the domestic aircraft industry: the length of the working zone is more than 20 m, the length of the installation is more than 60 m. The furnace provides uniform heating at a rate of 20 to 200 °C/h. Here the beam is heated to 750 °C to remove the residual presure.

During the restoration of production, the installation of electro-beam welding was modernized. The management system has been updated. Now two welding guns are used instead of one. A more reliable and efficient vacuum system was installed at the plant. Due to energy-saving technologies, the consumption of electricity decreased.