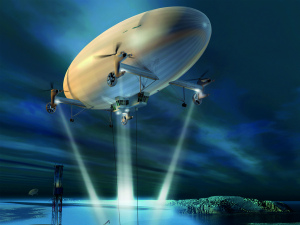 The world over the past few years has a real boom in airships. Several major international companies released either prototypes or existing examples of aircrafts. The Design Bureau of Moscow Aviation Institute has started testing its own developments, which, there is hope, will find their niche and will be in demand in several areas: tourism, air patrols, parachutists training and meteorological studies.

Balloons are on the hype

On all continents not only traditional aircraft designers, but also businessmen and scientists fr om other branches are busy creating prototypes or even "combat" models of complex structures which we used to call balloons in childhood. The traditions of Baron Zeppelin were revived in Germany, releasing the airship LZ-NT for tourists transportation. It is called the new Zeppelin. Lokheed Martin, the world's leading manufacturer of fighters, is developing a hybrid aircraft, a significant part of its lift force is created by the aerodynamics. One of the largest prototypes – Dragon Dream of “Aeros” company. The length of the hull is 81 m, the "dragon" has so far been built exclusively as a demonstrator of technology in half of the real one, and this is not counting the numerous modifications of airships for meteorological observation and even anti-terrorist measures.

In addition, MAI started testing of aeroyacht "Helios". Use of experience in aircraft engineering and modern materials allowed to adapt design to quite tangible market niches.

The explosion in Peresvet

Last October, suburbs of Moscow, Peresvet city. In hangar test complex of "Atlant" company, domestic manufacturer of aerostats, a loud bang was heard. The framework exploded, but the cover of the airship still was in one piece.

Head of Design Bureau Vadim Demin is full of optimism. "It was blown up wh ere it’s necessary and almost as needed", - the designer is rubbing his hands, showing a digital model. "Helios" was designed in the Abacus program, a digital model of testing cover can even be loaded on the laptop, the calculations showed the correspondence of calculated data to the field experiment.

For about a year, MAI has been doing various tests of one of the most amazing aircraft. "We had a dream to create an alternative to traditional helicopters and airplanes and make the safest aircraft in its class. Looks like it is happening", – said Demin.Designed and assembled by engineers and scientists, "Helios", with a carrying capacity up to 560 kg, is able to carry four people, rise up to a height of one kilometer, and move at about 100 km/h.

However, the main difference of "Helios" from colleagues of other manufacturers is the ability in any critical situation to provide a secure landing almost anywhere, "even on the field, even on the swamp. The secret is in the special design of the cover: the frame is made of composite materials similar to those used in creating the Boeing 787 or the MC-21, and special fabric holds helium in the cover for a few months. The device is equipped with an engine that allows you to land and take off from almost any surface. Well developed tail unit provides stability of the apparatus in longitudinal and the transverse channels of control. Due to the use of a number of non-trivial solutions, for example the aerodynamic shape of the hull and special hoop, a high degree of hybridity is provided - about 40% of the lift power is provided by aerodynamics.

Three fifty and the flight of "Hummingbird"

With the beginning of aeroyacht "Helios" testing MAI was, as it is called, in the trend, but the first steps to the suddenly rediscovered popular direction of aeronautics at the Institute were made much earlier. Almost by an accident. About ten years ago, during the boom in the real estate market in Moscow, the acquaintance Director of advertising agency asked to organize a panoramic shot of the neighborhood. There were planed to build luxury residential complex. Drones had not been commonly used yet. For panoramic shooting of an advertising project it was required to raise a balloon to a height of 150 m with a volume of about 1.5 m3 and weight of 1,5 kg - camera Sony HD and a rotational device.

However, at the first test - lifting of the ball - the construction began to dangle at a height of 50 m. Completion of the mission – shooting video – was under threat! Moreover, the camera and equipment had to go up to a height that is three times higher – up to 150 m. It was decided to compress the ball and add the tail unit so we got a snake-ball. The customer was provided only with photos, the video picture could not be made qualitatively.

However, experience is experience. Difficult advertising project drew the attention of designers to the promising field of aeronautics. Designers started to get acquainted with the history of the world and Soviet use of airships. To create new technologies based on modern knowledge and materials in the field of traditional aviation. To do numerous experiments. 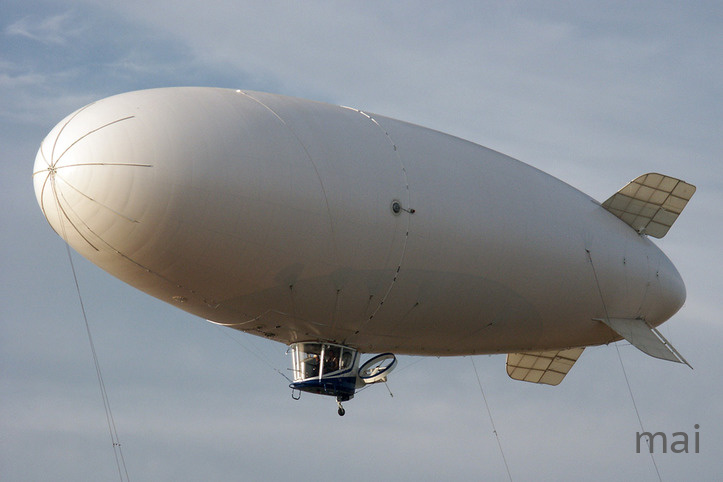 The main materials for creation of the cover of the first balloon "Hummingbird” were dacron and polyethylene - the designers simply bought several inflatable toys at the subway station and cut them, and the first balls happened to be controlled by fishing gear - scaffolds, coils, several times the spinning of the great fisherman Demin. Then technology began to change drastically.

In a first modification of the "Hummingbird" balloon managed to combine advantages of classic balloon and a kite. This allowed to provide stability in windy weather and to lift the device to a greater heights. The aerodynamics of the vehicles has been significantly changed. The appearance of the tail unit, the struggle for stability, the correct angle of inclination relative to wind currents (this aspect has been studied for a considerable time) allowed, for example, tethered balloons to maintain a stable position better than those of other manufacturers. Knowledge in the design of airplanes and gliders was also used.

Vadim Demin's colleague Sergei Svinin recalled first experiments with humor. Small balloons were tested directly on campus, on the Main square. The residents of nearby apartment buildings watched a test with an interest. But once the experiment was interrupted by... the police. Vigilant pensioner, standing on the balcony, took the airship for a UFO and called the relevant services. Became acquainted with the perspective development, the guards of the order were acquired a sense of respect for the work of the leading aerospace university of the country.

But with the improvement of models, MAI specialists began to receive contracts for the commercial use of developments that allowed them to somehow compensate for their own research costs.One of the developments – K-15 is successfully used for calibrating radars. The assignment was performed in Yakutia. It turns out that the radar calibration is performed every six months. For this purpose, indicators are lighted on a specially built wooden tower. This work is expensive for a maintainer - it is necessary to provide power supply.

MAI balloon has helped to solve the problem. Work with aeronauts saved the radar workers from the need to update the cable network once every six months, the accuracy of measurements has also been improved. The experience with meteorologists from Tomsk turned out to be successful. "Hummingbird" was used for measurements of temperature, wind speed and even to calibrate sensors.

But let's get back to the testing in Peresvet.

The designers turned their attention to the passenger segment, after they gained experience in developing small airships. It was not possible to construct and create a prototype of a large apparatus. The project could require hundreds of millions of rubles. But a small ball of 10 m length and 5 m width, equipped with a motor, a motor-gondola and chassis, was quite successful.

The spread of new technologies and materials gave a powerful impetus to the airship engineering. MAI constructors have designed "Helios" in digital environment, in the Abacus program , the frame was made of composite materials (gliders of most advanced aircraft in the civil aviation consist of carbon by one third or more), gas-filler is being kept by innovative fabric that is able to maintain the tightness for several months, so it was made possible to create a machine capable of overcoming more that 500 km without landing.

Parallel work on the creation of "Hummingbird" also gave its results. MAI designed a balloon-type aerostat, which can be raised to a height of 2500 m; it can raise paratroopers in special funiculars, like the way it is arranged at ski resorts.

A version of the multi-seat aircraft is being developed. “Airships have a lot of possibilities for use, but tourism and parachuting are considered to be the most promising ones”, - said Aleksey Alekhin, a head of "Aeroclassica" aviation club. For example, in Russia the resource of domestic production of An-2 aircraft, which are ideally suited for dropping cadets on round parachutes, has almost exhausted. The resource of other aircraft like An-28 and L-410 and their engines is coming to an end. This type of aircraft in Russia is no longer produced.

Not only for passengers

Today in Russia, however, as in many other countries of the world, the development of airships as an alternative to railways, cars or even navigable vehicles is actively discussed. In parallel with the creation and testing of aero-yacht "Helios", designers are thinking about the development of the family, for example, the creation of a four-engine airship "Helios-2500", which accommodates two pilots and nine tourists’ passengers.

Another promising development associated with partner companies. For a manufacturer “RosAeroSystems”, various systems and structural elements are being developed and manufactured, for example, a hybrid transport airship of the “Atlant” series. Depending on the modification, the payload can reach up to 60 000 kg.

This is its difference from most traditional airships, which require special infrastructure for mooring: either ports, or just a group of enthusiasts holding the balloon gondola while boarding or landing the passengers. But in recent years, technology - the production of composites, special fabrics for ballooning, capable of maintaining tightness for several months, and, finally, the idea of using new cheap safe fill gases - are of interest to the industry of both scientists and entrepreneurs. But this will be a completely different story.