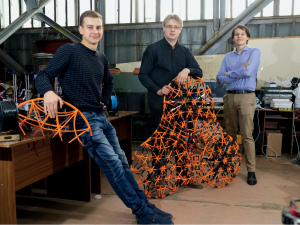 In the winter of 2017 in Moscow began the trials of the drone aircraft, designed and assembled by MAI designers and engineers. The vehicle fully created by a team of students fr om the aggregates like engines, propeller, equipment and many others was launched.

At the University Square of MAI, a new drone got into the air. Its payload is up to 20 kg. The device is able to stay in the air for half an hour.This was a full cycle project. Its paperless drawings were developed in the Dassault Catia program at the 101st department of MAI. All the machine components - blades, body, hardware unit and engine, are connected. Strength prediction of all key nodes is made in the Russian program "Logos".

The graduate student Andrey Kolpakov designed and created a tooling for the manufacture of propellers designed for a specific brushless electric motor, laid out a screw of composite fabrics for aviation technology. This new drone got a suitable name “Tarantula 1”. It was not random at all. Its bright black-orange coloring gives the vehicle a resemblance to a tarantula spider and also its constructively power circuit of thin strong threads has a similarity to the web, which spins a spider. 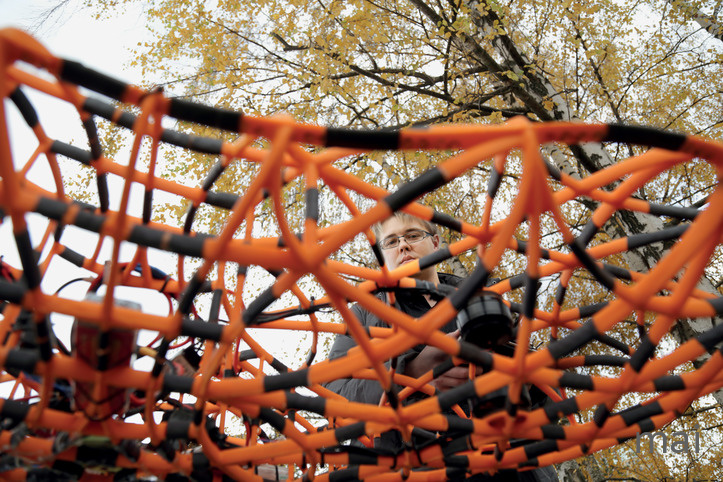 The strength prediction was carried out at the initial stage in the Logos program, and with the application of the "large aviation" rules, was used the standards of ARP4761 "Guidelines for methods of safety assessment of aircraft systems and aircraft equipment" and ARP4754 "Guidelines for the certification processes of highly integrated civil airborne systems courts ". This allowed developing not only a vehicle more powerful in comparison with competitors, but also a safe machine. The drone is able to fall from a height of 10-15 meters to the ground and not break down. In a collision in the air with other objects, its body remains intact, allowing to carry out all the tasks assigned to it further.

Consequence of a diploma

Appearance of Tarantula is another story.Two years ago Andrey Kolpakov took his diploma at MAI 102nd Department of Helicopter design. He made project called a “sky crane”. It is a large tethered drone with a lead wire, receiving electricity from the ground by cable, which in time could replace the Mi-8 helicopter for lifting massive structures in high-rise construction.

The special part of his final graduation thesis consisted of 100 pages, but he had to write a lot of material, regarding the technical part of the project. “After printing I had two books of technologies. They are comparable with the volume of a half Karl Marx book Capital,” – recalled Andrey. 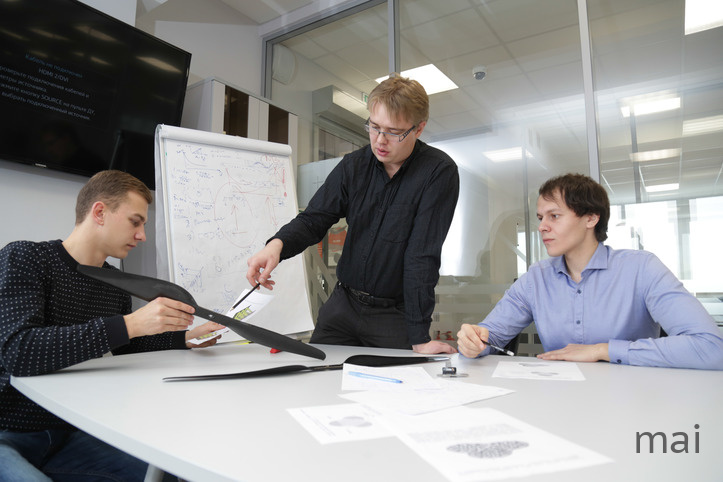 So he entered the graduate school with Professor Vyacheslav Reznichenko at the 104th department of the “Technological design and quality management”. The ability of training in postgraduate study of MAI allowed to access all necessary infrastructure. This is the opportunity to work in programs for paperless design, and consult experts in materials and equipment.

A new goal was set-to create a drones protected from collisions. Many cars are beating against the walls of houses, trees or when falling on the ground. Andrey took to lead simultaneously two directions - the creation of a safe body and screw. A room was allocated for work. In the workshopthe engineers built a three-axis machine: during the training at MAI Kolpakov received a specialty as a setup man. Installed 3D printers.

The team began to form. For example, Dmitry Tuyev, who is studying at the Faculty №1 ”Aircraft Engineering” , helped with the strength calculations and debugging of technology, was engaged in a business plan for the promotion of blades. Igor Burundukov, a graduate of the MAI 101st Department of Aircraft Design, to maintain the optimal balance of weight and strength characteristics, selected the parameters of layout of fabric layers in the production of components from composite materials. In total, in the project were busy more than fifteen people.

In the laboratory Kolpakov showed the screw. The noise level created in the same laboratory is reduced. “At all stages of production and assembly - from the installation of a ring with magnets of the necessary focusing before the flight tests - the technical process passes control. Therefore, domestic engines continue to work after getting into the salt fog and for a while even the ways to maintain the air in the air after getting into the dust cloud.

If you use modern design methods, wh ere the computer calculates optimal modes and vibration when creating a certain product for a specific task, then the machine efficiency began to exceed the parameters of the best imported samples. Knowing the composite technology and consulting colleagues provided good characteristics of the Tarantula. Made at MAI screw did not delaminate at high speed, even when the tips of the screws approach the speed of sound. A properly designed screw experiences less vibration and, as a result, less noise.

In the INUMIT Company, created at the chemical faculty of the Lomonosov Moscow State University, special resins are made for impregnation of composite screw fabric. The graduates of the physics department are engaged in the production of magnets and an electric motor: this is probably the only case when a domestic motor is put on the drone. “When all the important elements of the system like the body, screws and the engine are integrated even at the design stage of the machine, the finished product can get a lot of advantages compared to similar drones, assembled as a “constructor”. And such are mainly sold on the Russian market,” - noted the coordinator of the group Leonid Firsov, the colleague of Andrey Kolpakov.

“We created drone from domestic components. We have a lot of partners but Tarantula could appear only at MAI. Here you can find the conditions for the integration of developments in a variety of disciplines - from new materials, electricity, control systems and to supercomputer modeling”, - said Leonid Firsov.

“Tarantula” is well acquainted with at least one potential customer - EMERCOM of Russia: for several months the drone was tested of Barents Resque. Drones are coping well with the tasks of finding and rescuing fishermen in the spring on breakaway ice floes. The Copters are quite successful in patrolling the Gulf of Finland at a distance of up to two kilometers from the coast, or, for example, searching for lost mushroom pickers in the forest belt in the summer. In the long term, drones can perform relay functions, they can be used for Arctic reconnaissance. Scientists are working to create autonomous flight stations in the Arctic. Electricity for charging batteries would be due to the conversion of wind power, and the machines themselves could significantly improve navigation and safety in the northern waters.