MAI entered International Consortium on the creation of supersonic aircraft 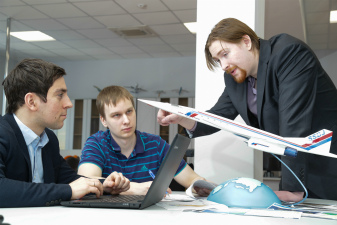 Following the legendary Concorde and Tu‑144, the development of second generation of supersonic civilian aircraft is going on. The EU-project Rumble, aimed at reducing the impact of sonic booms, joined the team of Moscow Aviation Institute (National Research University) as a co-executor.

The first flight of Tu-144 was 50 years ago, in December 1968. Tu-144 and its Anglo-French competitor Concorde became aviation legends. These aircrafts developed a fantastic speed for civil aviation - over 2000 km/h. It allowed to fly over long distances twice as fast compared to ordinary aircraft.

However, due to a number of reasons (a few major accidents with human victims, high fuel consumption compared to ordinary aircraft) supersonic aircrafts had to be removed fr om lines. The last flight of Tu-144 with passengers on board on the route Moscow – Alma-Ata was in 1978, Concorde's last flight was in 2003. About ten years ago, several teams of scientists around the world began to create new concepts and technologies to make supersonic flights for civil aviation not only safe, but also commercially profitable.

The Americans are working on about five different concepts, including aircraft S-512 for 18 passengers, Aerion Corporation – model AS2 with a flight range 9 300 km for 9 passengers. The experimental work is conducted today by the Boeing Company and NASA, in cooperation with major engine companies Pratt &Whitney, and General Electric. Development of supersonic aircraft version "JAXA" is held in Japan.

A team of scientists from the EU consortium of Dassault and Airbus develops the European version of the new passenger airliner. Created by the European project of aircraft is significantly smaller compared to the Concorde and the Tupolev's sizes, designed to carry 12 passengers over distances of up to 8 300 km. The planned speed is 1.8 M. It is expected that supersonic mode will allow to deliver passengers from Moscow to Vladivostok in 6-7 hours.

The Sky of Paris

Several months ago, MAI joined the European project Rumble, which main objective is to minimize sonic boom. The use of traditional technologies, such as in military aviation, prevents to fly an airplane at supersonic mode over the cities and densely populated area.

The aim of the project is to reduce the level of sound impact from the level of more than 100 Pascal by approximately ten times. In this case, the sonic boom of a prospective aircraft can be reconciled with the noise of the modern metropolis, and pilots can use the speed advantage to the maximum. Moreover, the Russians have already made a notable contribution to the European project. A little over ten years ago, designers and engineers of the Sukhoi Company offered a glider configuration with minimum acoustic impact. At the same time, three concepts were developed - with variable wing sweep, minimal noise and maximum range.

At the end of last year, it was announced on the accession of MAI as a full participant to Rumble program. The university delegation took part in the working group of the leading European aerospace corporations.

One of the main objectives of the project that Rector of MAI Mikhail Pogosyan sees is critical, measured by the day or more, reduction of travel time over long distances. For example, the supersonic will allow to fly from Moscow to Vladivostok or Beijing in a few hours, saving for an entrepreneur a day (and sometimes several) of working time.

It is expected that the new aircraft will be equipped with an engine capable of taking the aircraft to supersonic speeds. In this mode the machine will fly over oceans or sparsely populated land. At the same time, as the project participants expect, the cost of a flight for a passenger will be equivalent to the cost of a ticket in the business class of an ordinary aircraft.

Innovations at the start

But what an aircraft will it be! If all the dreams of developers are realized, MAI will take part in development of the most innovative aircraft in the world. Here you will be able to compete even with the creators of Boeing Dreamliner 787, wh ere about half of the systems were updated.

To ensure such fantastic conditions today, the developers will have to explore and introduce many innovations that could fundamentally change approaches to creation of new aircrafts, materials and design techniques.

It is expected that only one pilot will carry out the piloting of the aircraft. Functions of the second pilot will be given to an electronic assistant or partly distributed among ground traffic control. Designed for one person cockpit will substantially improve the aerodynamic characteristics of the aircraft. Revolutionary changes are connected with the glider. Its construction is supposed to be anisogrid and made of composite materials. Metal wire will be "grown" on 3D printer, the use of thermoplastics will be increased in the structural system. New materials will reduce the weight of glider to a record of 20-30% as supposed at MAI.

New digital technologies will not only facilitate work of the pilot. They will change traditional approaches to the glassing of fuselage. Indeed, created in the coming years, thanks to virtual reality technologies, widescreen displays can generally replace the cockpit glazing, as well as passenger windows. The project involves the absence of traditional glass elements. The picture of what is happening behind the fuselage - both from the pilots and from the sides - will be displayed on a large-sized flexible panels. The technology of synthetic vision will significantly improve the aerodynamics of the aircraft and, oddly enough, drastically improve visibility. What happens behind the skin will be displayed on huge flexible monitors, like large windows in modern high-speed trains.

MAI students take part in three of seven working groups of the Rumble project. The project aims at minimizing the noise of flying aircraft at supersonic speeds. Our scientists are actively involved in working groups dealing with the sonic boom, as well as flight tests and the creation of a demonstrator. But most importantly, several domestic organizations have been working in the project for several years. The largest of the Russian side is the Central Aerohydrodynamic Institute named after Professor NE Zhukovsky, also part of the work is distributed between Gromov Flight Research Institute (the largest airfield complex in Europe and the testing base) and Baranov Central Institute of Aviation Motor Development.

According to General Director of Central Institute of Aerohydrodynamics Sergey Chernyshev, quoted by “Rossiiskaya Gazeta”, today there are solutions to cardinal reduce of sonic booms impact. If Tu-144 has a level of sonic boom (sharp pressure drop in the shock wave) equal to 100-130 Pa, modern research has proven: it can be changed to 15-20, moreover, reduce the volume of the sonic boom up to 65 decibels (equivalent to the noise of the big city).

The team at the start

“MAI created a full team of about 30 people”, - said project manager Dmitry Strelets. 1 category engineer Ilya Grishin came to the Research Department -101 two years ago and gladly participated in the project. Today, according to Grishin, technologies and materials, used for several decades in the civil aviation, mostly ran out of steam. The future is supersonic. “There's always “faster, higher, stronger”. I'm glad that MAI had a chance to take part in the development of a new class aircraft from the very first years of the project”, - said Ilya Grishin. Today Ilya is busy with developments in the area of stability and control. So far, there are no official standards for the allowable level of sonic boom. And, most likely, it will be defined not earlier than 2022.

Close attention is paid to the testing part. A discussion on use of the largest aerodrome of Gromov Flight Research Institute in Zhukovsky, domestic flying laboratories will be used for testing individual assemblies and technologies. Thanks to the cooperation with Central Aerohydrodynamic Institute and the European Union, MAI becomes the first domestic University, which specialists were immersed in the creation of the new aircraft at a very early stage of the project. Modern laboratory facilities, supercomputers and young specialists, experienced in the best domestic aviation companies, can make a decisive contribution to development of the project.