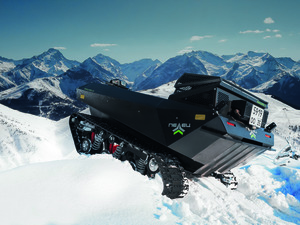 MAI plans to begin the implementation into production of a new development - a robot with autonomous control on the Pelets tracked platform.

After completing a series of tests, the apparatus created by a dozen students and teachers has great prospects for use by security forces, geologists, hunters, and even in agriculture. It will be, in fact, “the dream of a rescuer”: the machine controls all the elements. It is equipped with a parachute, swims, moves over rough terrain on a track, and even puts out the fire.

In the past, Dmitry Kozorez, Vice Rector for Academic Affairs, Associate Professor of the Faculty №7 Robotic and Intelligent Systems, and the leading engineer of the Department 704 Information and Control Complexes Ilya Postoyev devoted most of their free time to extreme sports: off-road trips, hikes, and snowmobile trips in winter Kamchatka. Therefore, when the Ltd Severniy Vezdekhod Company approached MAI about five years ago with a proposal to turn the domestic snow and swamp-going vehicle into a completely autonomous unmanned system, the request of businessmen was receivede nthusiastically.

Established in the Vologda region, the Severniy Vezdekhod Company produces domestic amphibians. The metal is supplied from the neighboring plant Severstal. Products - up to 400 machines annually - are eagerly bought by hunters, geologists and fishermen in Russia, Finland, Canada and even the USA. 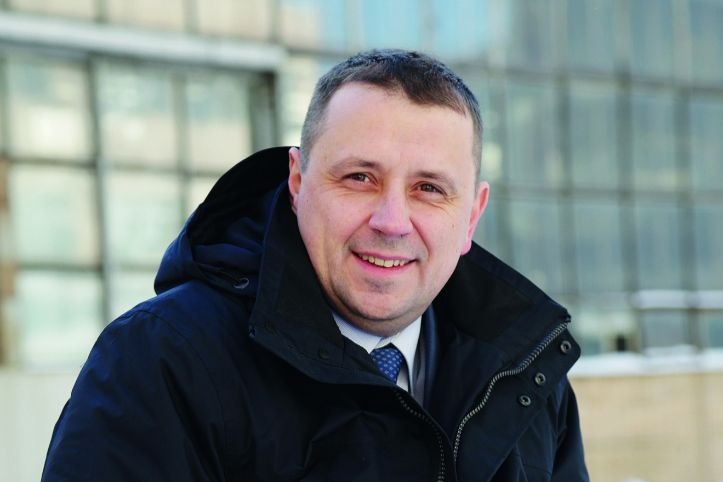 - The price is significantly lower compared to international competitors and special versions of the devices are more affordable, - explained Maxim Egorenkov, Development Director at Severniy Technopark.- For example, among the latest big sellers is a building pile-driving installation on a swamp chassis for reinforced concrete piles: the machine is readily used in the construction of private houses and small commercial buildings.

Egorenkov said that for hunters, Ministry of Emergency Situations (MES) and security agencies entrepreneurs want to create an autonomous unmanned all-terrain vehicle, and the mass production of such machines anywhere in the world is not carried out. Meanwhile, amphibians with a built-in robotic (unmanned) control module could form a significant share of domestic amphibian sales for the MES, the army, and even hunters and fishermen.

- We have not heard that autonomous unmanned systems operated in Russia for our realities: off-road, lack of full-fledged 3D-cards, with domestic software and element base, as well as an adequate price. Creating our alternative to “exotic” devices with a control system, for example, Tesla and Google-car, by students and young scientists from the Department 704, was a real challenge, - recalled Ilya Postoyev, Senior Engineer of the Department 704.

Depending on the modification, the lightweight all-terrain vehicle of the Pelets series (named after the inventor Vladimir Peletsky) can carry up to 800 kg of cargo (up to 600 kg on the water) and haul a trailer weighing up to 1100 kg. The speed of movement on land is up to 70 km/h, on water - up to 6 km/h (due to the rotation of the tracks). The device can protect itself with armor on the fifth class of armoring. 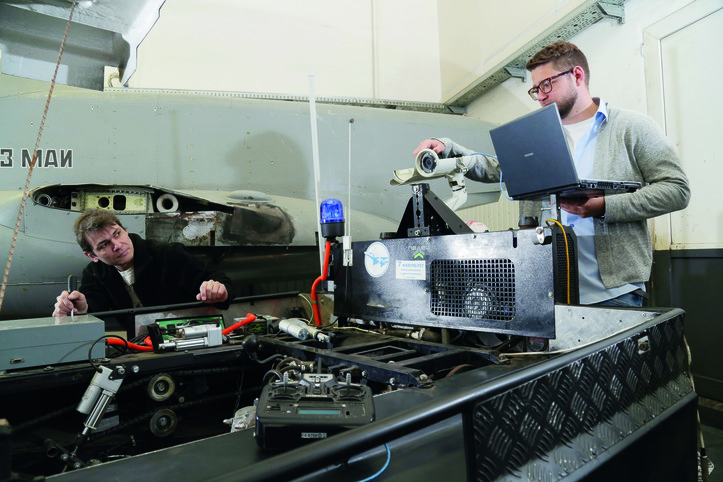 In the world, commercially available off-road vehicles for civilian use with fully autonomous control have not been manufactured yet. At least I don’t know anything about it. Meanwhile, there are great opportunities for sales to security agencies, drillers or geologists - for the delivery of goods in difficult terrain. At the very beginning of the project, we turned to a large industrial research institute of robotics. In one place, we were asked for an unaffordable amount of 500 million for the company (apparently, people are fine with motivation, as well as with the creation of platforms). Then we called all the leading universities: Moscow Institute of Physics and Technology (MIPT), Bauman Moscow State Technical University (BMSTU), Moscow Aviation Institute (MAI). Here it went very quickly, they gave us an all-terrain vehicle, a complete set. The specialists showed a cool result very quickly.

Electronics Based on the Terrain

Amphibian with good technical data needed its own on-board electronics system. Engineers from Cherepovets asked MAI specialists if they could equip the machine with an autonomous navigation and control system so that the device itself could make decisions in fully Russian conditions: move around the area, perform manipulations (for example, put out a fire or take soil samples), autonomously interact with other models of technology, without resorting to 3D-maps (in America and Europe, virtual terrain maps are not uncommon for a long time, but machines that are not adapted to our conditions can be disconnected from reality). The proposal came to the head of the Department 704 Mikhail Krasilshchikov. For almost half a century, the Department’s work here has created information and control systems for many types of unmanned complexes, the staff of the Department was even one of the anchor developers of the national Uragan navigation system. Later, it received a much more peaceful name GLONASS.

In the end, if the integrated navigation and control systems created at the Department help rockets, airplanes or satellites to move around, then an amphibian can be equipped with a similar system. Cherepovets machine builders transferred to MAI a prototype machine, helped with components, and began to refine the project. 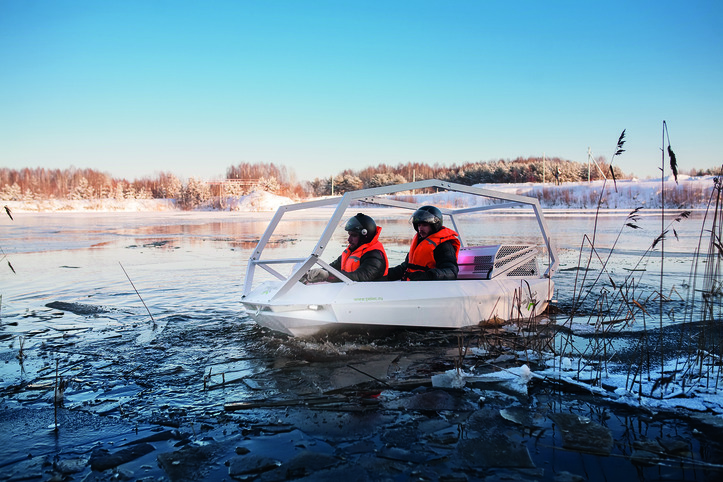 Initially, they decided to distribute the work among several students. It was assumed that everyone will be able to implement any part of their work, and the general solutions can then be integrated later. Someone wrote a program that allowed amphibians to land at a given point on a conventional flying wing parachute, someone “taught” the machine to identify obstacles...

But one thing is to write a program in a cozy audience, another is to make it work on an all-terrain vehicle, and even in the specified operating conditions: in a snowdrift, in a swamp or in a forest.

- Over the decades of the Department's work, we have accumulated vast experience in creating integrated navigation and control systems. Both for students and young scientists to create a “brain” for the new all-terrain vehicle was not a big deal, - recalled Dmitry Kozorez.

A couple of years ago, MAI decided to put Peletz in the competition among the best developers of robots - RoboCross. The all-terrain vehicle behaved perfectly - on a caterpillar it was ahead of competitors' machines — other universities and large industrial companies — in cross-country races. But the programmers and engineers from MAI could not breathe out with relief. 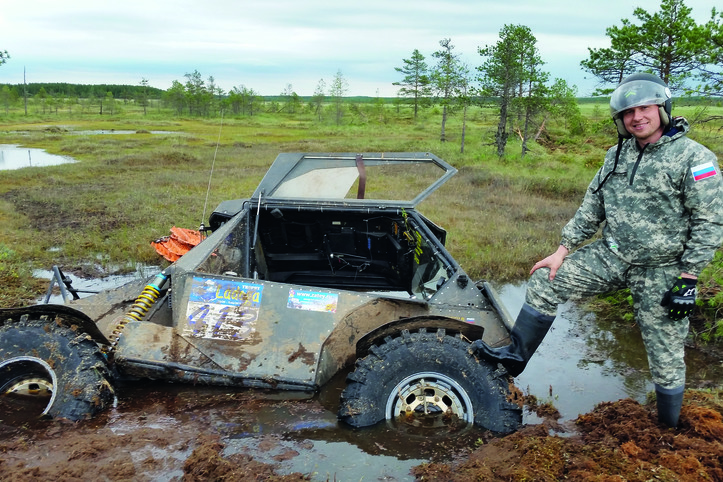 Literally 20 meters from the finish line there was an incident. The Cherepovets all-terrain vehicle stopped dead and allowed less “conscious” competitors to overtake it, although all mechanical systems, as the debriefing showed later, worked flawlessly. The annoying breakdown made it necessary to completely revise the intelligent control unit. Detailed analysis showed that the hardware did not withstand vibration loads. Cherepovets engineers developed the first version of the machine based on the movement through the marshland, so the chassis was created with virtually no elastic suspension elements.

As Andrey Voiskovskiy recalled, MAI specialists had to re-create the hardware of the navigation and control unit. Vibration was defeated.

10 Candidates of Technical Sciences at the age of 35 years old are working today at the Department 704. Most of the specialists are grown just because of such small projects.

During one of these tests in Odintsovo region, the drive for controlling the lines failed and the wind carried off an automated system. Students and scientists had to mobilize search and rescue operations to search for a parachute with a navigation and control system. And in 2016, Pelets received the first prize at one of the Russian robotic competitions - RoboCross.

Today we are considering several areas of amphibian use. One of the promising market segments is the fire brigades and emergency structures. Pelets is indispensable in those areas of work where conditions are especially dangerous for human life and health, for example, when localizing forest fires, consequences of accidents at the dirty (chemical or radiation) industries.

Autonomy allows the robot to independently get to a given point, for example, through water or through blockages and dirt, and then perform a number of operations, for example, extinguish a fire or disassemble the remains of destroyed walls. Algorithms of interaction with other robotized systems allow to give precise commands for working with other robots or, for example, dropping fire crews. 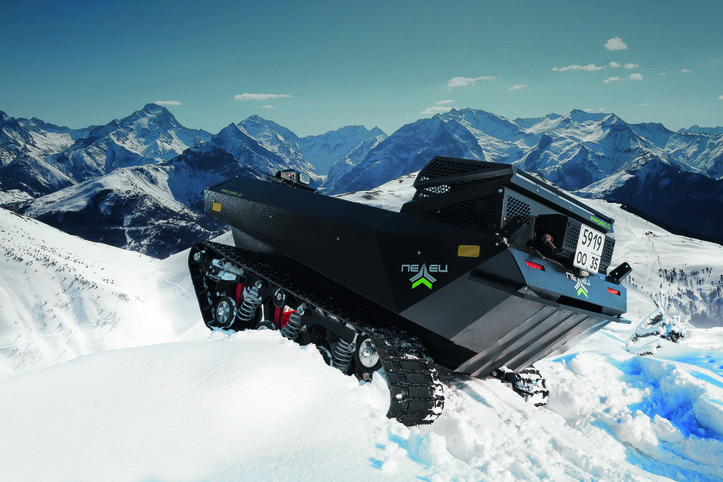 According to Maxim Egorenkov, today, in the framework of joint work, RoboPROB and MAI are negotiating with a number of agricultural enterprises. For farmers, a robot based on the Pelets all-terrain vehicle will automatically analyze the chemical composition of the soil — engage in sampling with precise positioning on the field. The Skolkovo Foundation is interested in financing one of such projects.

The development of the autonomous complex of a new generation is one of the brightest, but far from the only developments of the Department 704.

- The value of the project is that we managed to attract many students and future specialists to participate in it. They went from the idea to its implementation into iron, which is very important for young specialists, - said Andrey Voiskovskiy.

There are several similar works at the Department. This is also a drone swarm control project (automated systems on the ground and in the air). Recently, the State Research Institute of Aviation Systems and the Thales company have begun work on creating an electronic passport for the pilot's “handwriting”. The project will reduce the cost of aircraft operation, taking into account the characteristics of individual piloting.

Today, the department employs 10 Candidates of Technical Sciences at the age of 35 years. Most of the specialists are grown just because of such small projects. The knowledge and skills of young specialists at MAI will help to create a new segment of unmanned vehicles in the country.

Mikhail Krasilshchikov, Head of the Information and Control Complexes Department

Students often come to us, asking for some kind of work. Almost always we find the task for them: to create a program, to refine the idea. Enthusiasts are very easy to identify:  they just go ahead and do it, bring the result even faster than the agreed time. They will become very good and promising engineers.