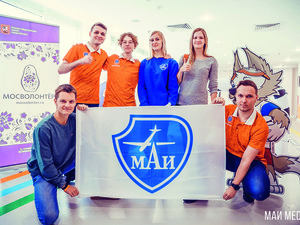 We are used to superheroes that exist only on the cinema screen. But really people with unique abilities and spiritual aspirations meet us daily. After all, how else can you call those who unselfishly responds to the difficulties of strangers, is ready quickly to solve other people's problems, is not afraid of new turns of events and is able to quickly answer all life questions and circumstances. Who are these superheroes of our time? They are volunteers, and 2018 has become their year.

Volunteer movement is gaining momentum in Russia, it is becoming more and more popular among  people of all ages and professions. Head of the Directorate for the Year of Volunteer in Russia Ksenia Razuvaeva notes, that by the fall of 2018 number of active volunteers in our country increased by 30% and exceeded 11 million man. The number of supporters and volunteer participants this year rose from 19 million up to 22 million people. 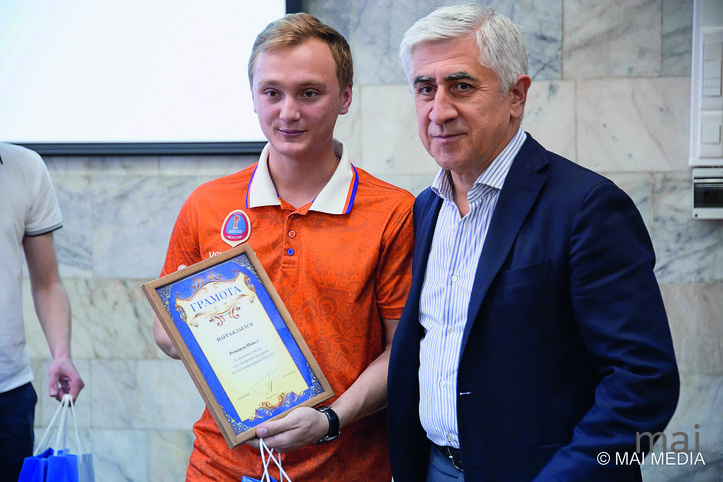 Moscow Aviation Institute also contributed to the development of the large-scale volunteer movement. Within the walls of the university there is a huge amount of active students, many of them are volunteers with experience, permanent members of the MAI Volunteer Center. Oblako magazine sums up the results of the Volunteer’s Year, telling an inspiring story of indifferent MAI student.

How to Become a Volunteer?

Baptism in volunteer work for Natalia Andryuschenko, a second-year student of Institute №2 “Aircraft, Rocket Engines and Power Engineering” of MAI, became the I All-Russian Congress of history teachers in universities of Russia, which took place in MAI and gathered over 1000 people.

Natalia always had a lot respect and love for history, was a community activist, strived to be in the middle of things - all this pushed her to take part in the event as a volunteer.

After the first experience Natalia understood: it is kind of life that makes her really happy. “I am a very sociable person and cannot sit still,” - she admits. - “Volunteering gives me the opportunity to realize myself and brings new colors in everyday life. During the year of my work, I met different people - they taught and inspired me, helped to develop.” 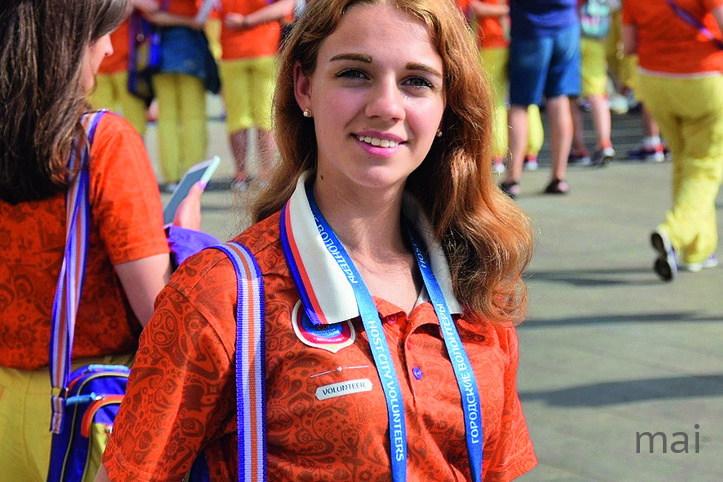 At first, Natalya was an ordinary volunteer, one of the most charming in the Volunteer Center of MAI. The next step in her volunteer career was the position of the team leader or coordinator of volunteer groups in various All-Russian actions, such as the Immortal Regiment, organized by the long-time partner of MAI, “Mosvolonter” project.

“At the Immortal Regiment, I was responsible for the distribution of water,” - Natalia recalls. “It was very hot that day. The event was attended by many elderly people, veterans, for whom the Victory Day is a very important and exciting date. We, volunteers, were required to have a quick reaction and multitasking in a variety of situations. It turned out that the inspiration from work helps to find hidden reserves in oneself and use them 100%. You simply do not notice the difficulties - there is only involvement in the work and pleasure from it.

Captain, on the Field!

One of the brightest volunteer memories for Natalia was the FIFA World Cup 2018 in Russia.

“At the interview, we were offered various situations, it was necessary to quickly draw up an action plan and argue why you did just that,” - says Natalia. – “The two important qualities of a volunteer are persistence and stress tolerance. There is just no way. A volunteer should always be glowing with joy and energize others - this is an important part of our work. But at the same time you need to remain serious enough to understand your functions and area of ​​responsibility.” 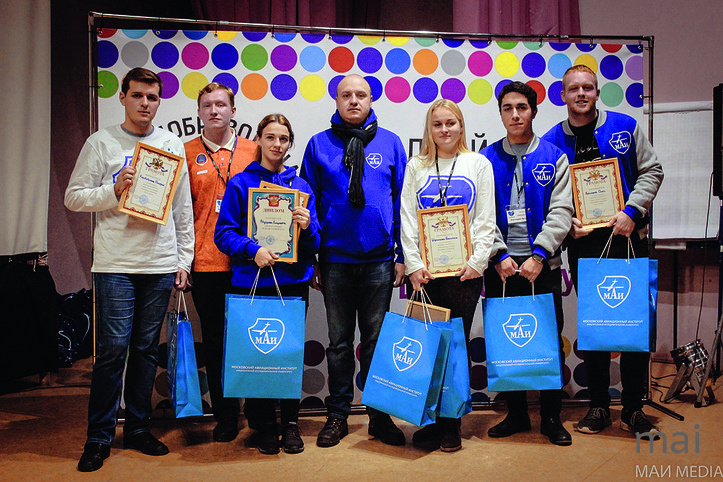 At the World Cup, the activity of Natalia and her volunteer group, consisted of 36 people, took place in Sheremetyevo International Airport. It was necessary to help arriving and departing guests, answer their questions, provide navigation. Sometimes even the knowledge of three languages ​​was not enough (in Natalia's arsenal - English, French and Japanese). One of the football tourists spoke only Arabic, the dialogue turned out only through a voice interpreter on the phone.

“Finally, we understood each other, and I was able to help him. And then, quite by chance, we encountered two more times in the center of Moscow,” – the girl smiles, - “and even took a picture for memory!”

During this work, Natalia learned the most important thing — to communicate with people and to build harmonious friendships. She can not remember a single conflict or a rude word addressed to her.

Volunteer as a Privilege

In the Volunteer Center of MAI, volunteer work is systematically organized. According to the head of the center, Ekaterina Gruntovskaya, in order to attract students to the ranks of volunteers, they developed a whole loyalty program there. Volunteers are promoted according to the program, depending on the number of events, both external and internal.

At the first level, a silicone bracelet is issued with the inscription "Volunteer of MAI" and the student receives the right to apply for an increased state academic scholarship. The second stage is the issuance of a silver card. It is received by one who has successfully carried out seven events, along with a brand volunteer set: a t-shirt and a cap. In addition, you can count on a tangible discount to the price of trips to the recreational and training centers of MAI. After 15 events held, the volunteer is presented a gold card and the “Golden Volunteer of MAI” badge: their owner can get on the Honours Board of MAI Volunteer Center, participate in sightseeing trips, and have other privileges. 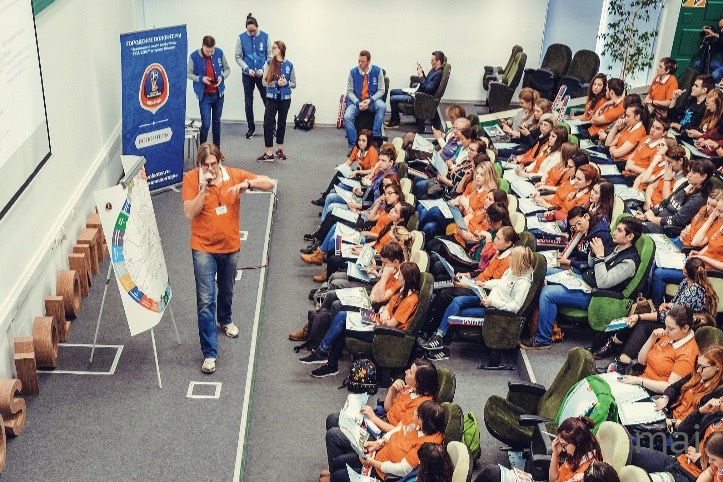 “On September 1, 2018, we conducted a survey among first-year students and captured a record number of students who want to join our volunteer movement — about 600 students of MAI,” - Ekaterina Gruntovskaya tells. –“We will be glad to see all interested students among our activists, we will try to involve them in this work.”

According to Ekaterina, today the number of students at the MAI Volunteer Center is about 300 people. She is confident that their number will only grow every year. MAI actively cooperates with Mosvolonter. MAI volunteers are frequent guests and participants of major events, including not only the World Football Championship, but also the Universiade, Big Volunteer Festival, Moscow Urban Forum, Night Cycle Marathon, NDExpo and many others. Quite recently, a fourth-year student of the Institute № 4 “Radioelectronics, Infocommunications and Information Security” of MAI Dmitry Korobeynikov became a torchbearer of the XXIX World Winter Universiade 2019.

You see all life at the Volunteer Center: the finals of the annual Volunteer of the Year competition were held there, after which it was decided to launch the MAI Volunteer Lecture Hall — to hold regular meetings with well-known and successful people in the format of lectures and master classes. And from the contest finalists and the most active volunteers to form a volunteer council, which will be engaged in the development of activities of the Volunteer Center.