Changing the Paradigm of Aircraft Engineering 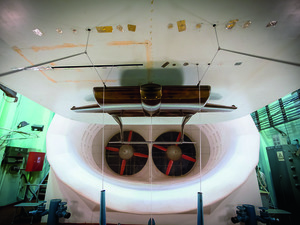 Scientific Director of the the Central Aerohydrodynamic Institute named after N.E. Zhukovsky (TsAGI), Academician of the Russian Academy of Sciences Sergey Chernyshev told about how TsAGI's research forms the near and far horizons for the development of air transport.

Your research interests are in the field of the sound impact theory, you are in charge of research at TsAGI to create a new generation of subsonic, supersonic and hypersonic aircrafts. What have Russian scientists achieved in this field?

Recently, at the International Congress ICAS2018 in Brazil, I presented an overview of projects in the field of supersonic on behalf of the International Forum on Aviation Research (IFAR) - the right to make this report was given to Russia, paying tribute to our developments and qualifications in this area. I received materials fr om NASA (USA), JAXA (Japan), DLR (Germany), ONERA (France) - the leading national research centers. The report was devoted to the readiness of the entire global aviation community to the creation of the next generation of supersonic passenger aircraft. 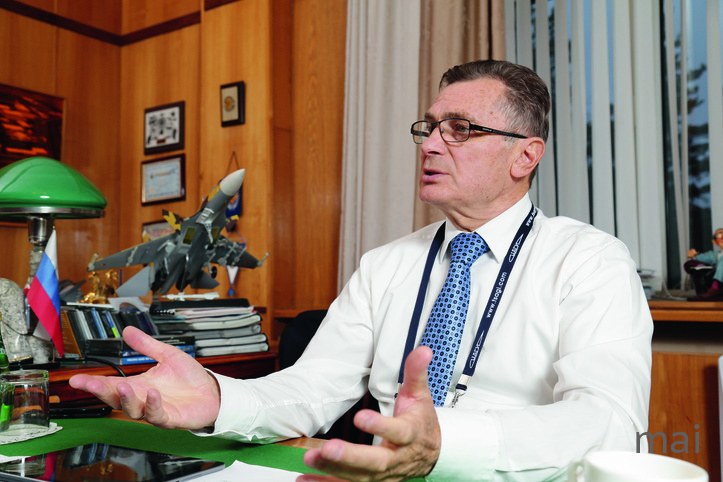 It can be stated that the technological basis for this has been prepared. We learned to deal with our main enemy - a supersonic boom, the noise because of which it is impossible to fly over populated areas. Mankind came close to the creation of a supersonic aircraft with a very low level of sound impact: no louder than the sound of a car door slammed or the average noise level in a large city, about 65 decibels.

The definition of an acceptable level of sound impact, which will become a universal standard, is now being conducted within the framework of the international project RUMBLE, where powerful cooperative of European companies found place. The project itself is an integrated part of a large road map dedicated to supersonic aircraft and developed by the ICAO (International Civil Aviation Organization) to the United Nations - requirements for supersonic boom are established there, which Russia, like other UN members, is obliged to fulfill.

What tasks does the RUMBLE project set to TsAGI, how does MAI participate in their solution? What has already been achieved?

We are strong in the computational methods to which the part of the RUMBLE project is devoted. A very strong team of experts in the field of numerical methods works in MAI, the university is the full partner of TsAGI in this research. We lead calculations in parallel, some of the tasks MAI researchers  solve on their own. Rector of MAI, Academician of RAS Mikhail Pogosian was engaged in the development of the supersonic passenger aircraft concept while he was a young leader, in the 80s. National research dedicated to this topic has been going on for a long time, all this time we raised our skills and now we understand well how to design such an aircraft.

All world developments in the field of supersonic aviation now stops the absence of such regulations, or has any country advanced further than others?

According to our observations, now everyone is sharpening the tools for creating a supersonic aircraft. We already roughly understand the zone of permissible sound impact and try to develop a concept in advance: the shape of an aircraft that will fit into these framework. But the real work will begin immediately after the adoption of the norms. The American company ORION made a statement that in 2023 it would launch a demonstrator or even a prototype of a supersonic airplane into the sky, but in the absence of norms, this is a big risk. Perhaps Americans will try to reclaim the standards they need. 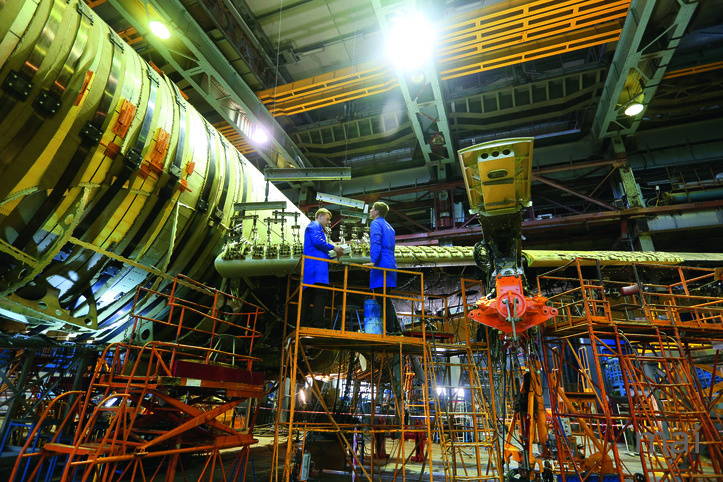 We have already worked out preliminary options, general view, concept of the aircraft. At the Hydroaviasalon - 2018, TsAGI presented one of the options — a prototype of a light business “supersonic” aircraft for six passengers. These aircraft have a very unusual look: fuselage with a curved axial line, with different cross sections, wings like a swallow, with a double V-shaped angle. The plane is a bit like a seagull. The engines are located in the tail and on the upper surface of the wing so that the shock wave fr om them does not spread down. This unique domestic layout is the result of the joint work of JSC Sukhoi Company, TsAGI and Central Institute of Aviation Motors. But there is other options and forms.

Hypersonic civil aviation is an even more bold challenge to the entire aircraft industry. At what stage are domestic developments now?

Civilian hypersonic aircraft is, of course, a very distant prospect. But we have to work now, and one of the projects of TsAGI (several European companies also participate in it, both Russia and Europe finance it) is dedicated to demonstration of a long flight possibility , made by passenger aircraft, at a speed of 7–8 times higher than the speed of sound. We need to make sure that the potential of the global aviation industry is already sufficient to reach this milestone.

Probably, the first supersonic passenger aircraft will appear in the 30s. It will start with business class airplanes, there is already a market for them now: fly to China for negotiations and back in one day - the dream of businessmen, for which they are willing to pay. Later it will appear a supersonic aircraft of other classes. Technologies are scaling, you just need to make this breakthrough. Another difficult task is to add a “hypersound” in the aviation transport system, because it will fly above subsonic aircraft, with a flight ceiling of 14 to 16 km.

What technologies on hypersound is offered by Russia and TsAGI? What is our contribution?

These are technologies for the formation of the aerodynamic shape of the aircraft. Hypersonic aircraft with a ramjet engine, wh ere it is very important to catch the air through the air intake, deliver it to the combustion chamber wh ere liquid hydrogen is injected, achieve steady burning and temperatures that materials can withstand, organize the exit from combustion chambers and calculate the design to withstand the overload and trajectory change. We solve such scientific problems. 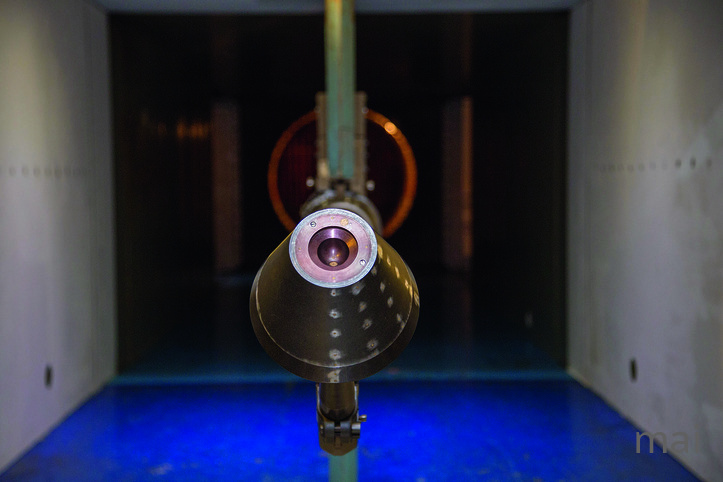 At the same time, the processes of hydrogen combustion are being studied; it is necessary to ensure the completeness of combustion in a very short period of time. As is known, the product of hydrogen oxidation is water. With the massive use of hydrogen as a fuel, inevitably condensate traces inevitably appear, which merge into artificial clouds, which, in turn, will have an impact on the environment. These points must be studied in order to predict the environmental consequences of the use of hydrogen.

Technique and methodology for conducting complex experiments in wind tunnels that we use, is also our technology, which earns great respect abroad. Our data is believed to be the standard, and our wind tunnels are involved in this project. In addition, TsAGI makes estimates of the possible flight trajectory, routes, and efficiency of using a hypersonic aircraft for the transport of people. We are trying to answer the question, what will such transport  change give to the transport system?

What Russian projects does TsAGI take part in? Which of them will be implemented in the very near future, according to the results of your tests?

All that will soon take off into the sky of Russia, passes through TsAGI. We give an opinion on the final stage of creating each aircraft, actively participate in the development of solutions in terms of forms, design, control systems, acoustics and noise - we play second fiddle at the Design Bureau.

Our flagship civil aviation is the innovative MC-21 aircraft with a composite wing, which was first used in this class of aircraft (Airbus and Boeing still fly “on metal”). We participated in all phases of this project, in developing the aerodynamic appearance of the aircraft, and now we are conducting its pre-certification tests. The plane is already flying, we are studying the data of its flight tests, together with the developers we are introducing the latest improvements, fine tuning. Today, according to its characteristics, it is the best aircraft in the world in its class. 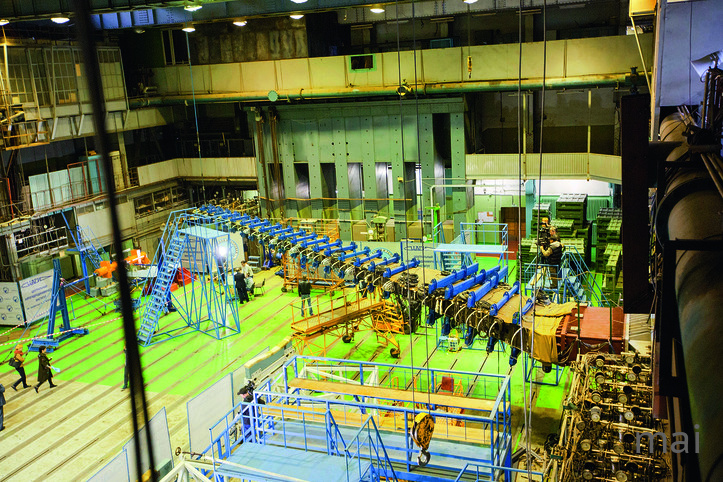 There is a development program for the SuperJet family of aircraft: SSJ100, SSJ75 with a smaller number of passengers, SSJ100 Long Range for long-distance flights, etc. Development of all new helicopters (their aerodynamics, durability, issues of flutters and stable oscillations, power design, control systems) are also with us.

In addition, TsAGI constantly working on conceptual projects of new aircraft. Recently, we have tested a model of a heavy transport aircraft of integrated circuit (TTC-IS), which should overcome the vast spaces of our country, having on board up to 500 tons of cargo. We have to show with the help of calculations and tests in the tubes, that such an aircraft can be designed. A whole fan of ideas is formed, which we share with the industry.

We have an effective interaction with MAI, we jointly work out various models and control algorithms for aircraft. At our institute, employees through one or even more often are graduates of MAI of different generations: both young engineers, experienced specialists, and great scientists.

How do you see the future of aviation? What ideas on its development do you find most interesting? 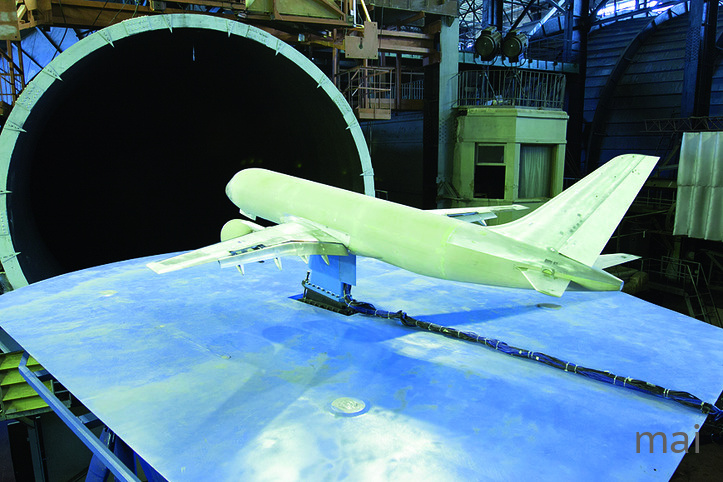 I think mankind has come to change the entire paradigm of the aircraft industry, and this will happen in the next 10–20 years. The air transport system is already too busy; high demands have been placed on aircraft efficiency and at the same time to their minimum impact on the environment. There should be new aircraft (for example, “flying wing”: airplanes with very high aerodynamic efficiency, in which the wing and fuselage are combined, there is no usual cylindrical body and wings with engines; they consume a minimum of fuel and make less noise).

To fly will be different. Aircraft will become unmanned or with a single crew member looking after the work of the automatic control system. Flight paths will change: no extra laps over the airfield and slow descent by the regiments. The entire global aviation system will switch to four-dimensional trajectories: the plane will have to appear at a specific point with an accuracy of a few seconds, a continuous descent & take-off section will be introduced. This navigation will be controlled by automatics, not by humans. It sounds fantastic, but it will be so.